Definition of a Robot: A Robot is a machine that can be programmed to do a task without being directly controlled by a human being.   There are two parts to a robotic system.

1. Hardware: This is the mechanical robot. The motors, gears, wheels, parts, computers that make up the machine.  This is the part you build.

2. Software:  This is the instructions for the tasks and actions the robot will do.  This is the part you write.

MINDSTORMS NXT is used to create the software that controls the actions of the robot hardware.  NXT MINDSTORMS software is a visual/icon system of assembling instructions.  The flow of direction usually moves from left to right.  This software is an example of a compiled program.  Programs you write in NXT must be compiled and downloaded to the NXT Brick before the Robot will perform the program.  (Scratch and Python are "Interpreted Languages.") 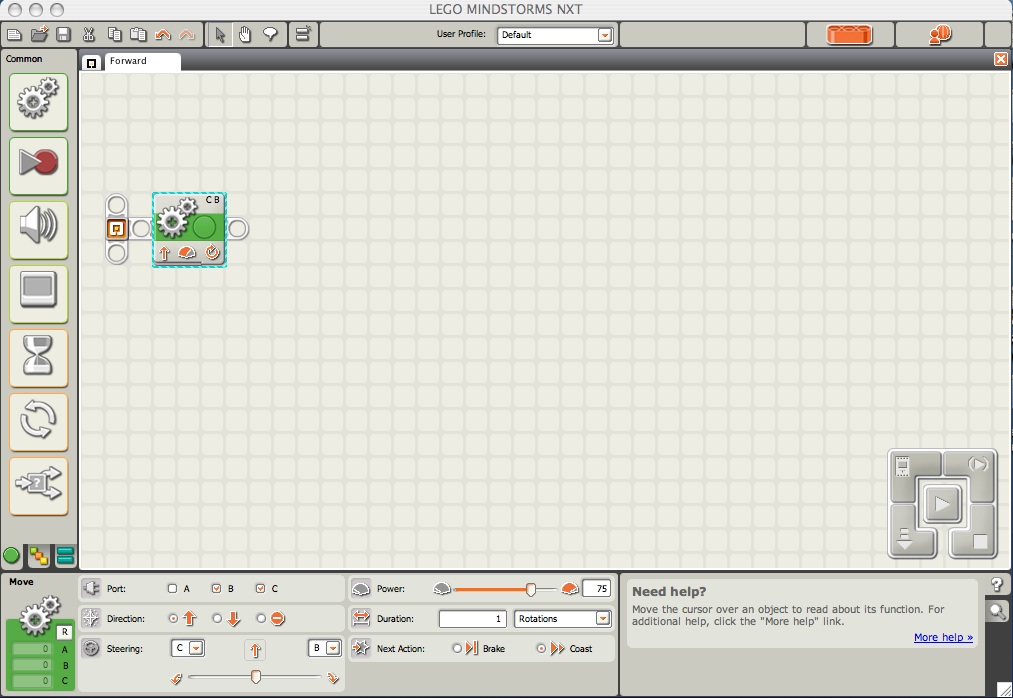 Movement Blocks direct motors A, B, or C to rotate clockwise or counterclockwise.  The motors have sensors inside them that can measure how much they rotate.  Motors C and B usually are used for the drive wheels on a vehicle Robot.   You may change the following variables on a motor on the details window.

Loop Blocks are like the "Repeat" or "Forever" functions in Scratch.  You may define how many times an action or set of actions is to repeat.  You may also use this like a conditional statement and have the loop work when a sensor or variable presents a certain value.

This is another use of the for conditional statements.  (Like the "If" Block in Scratch)  The Switch Block can use sensors or values to switch between differenct actions.

The Light Sensor senses differences in light intensity (brightness).  This value can be used to sense the light around the robot or differences in reflected light off of surfaces like the floor.

The Motion/Ultrasonic Sensor uses high frequency sound waves and echos to detect the distance between the sensor and other objects.

This button can sense in three modes, pressed, released, and pressed and released.  This enables the robot to sense when it is touching or bumping another object.

Sending (Uploading) the program to the NXT Brick.

In the lower right hand corner of the NXT user interface allows for communication between the computer and the NXT Brick that controls the robot.